The Dagenham & District Cage Bird Society was formed in 1935 by a few people who moved from the London area to Dagenham. They had been members of societies in their previous districts and decided to form a club in Dagenham.

The object of the club would be the cultivation and keeping of various types of cage bird, including Canaries, Budgies, British and Foreign. The club also forms a centre for discussion of topical interest, and its members feel that it is probably one of the best societies in the South Essex area.

During its lifetime the club has had various meeting places, among them the Halbutt street Drill Hall, the old Fire Station at Beacontree Heath, the Church Elm Tea Rooms, and the Glebe Road Conservative Club, but since the late sixties the club has settled at the Heath Park Hall Rusholme Avenue, Dagenham.

1935 - Seven entries relating to the Club have been found in archived copies of the Dagenham Post for this year. The first in January, names Mr W George as Chairman and discusses the election of Officers and the subscription fees, which were one shilling per quarter (4 shillings per annum - equivalent to 20p today) plus six pence affiliation fee to the Dagenham Poultry Circle. A Mr Tanner donated a cup to be competed for at the Annual SHow but this has sadly been lost over the years.

At this point in our history, meetings were being held at Pettit Farm, which sadly nolonger exists. Plans for a Young Stock Show in July was discussed and the number of members had increased as a result of the articles in the Post. In April Mr Poston, of the Cross Keys (public house in Dagenham Village) accepted the position of President of the Society. In July the first Cage Birds Show took place at Pettit Farm with a Mr Wass of Dagenham Avenue judging the entries and the results were published in the Dagenham Post. In December the first Annual Show took place despite fog delaying and the awards, medals, cups and prize money was presented at Pettit Farm on Tuesday, 17th December, 1935.

1936 - In February the Club held a Pairs competition which had 123 entrants with awards and prize money being presented at Petti Farm on 3rd March. At the end of February, concerns were raised over the future of Pettit Farm in the Dagenham Post, which could threaten teh meeting venue for the Club. The Pettit Farm annual supper and social was reported and during speeches, the intentions of the venue were outlined - to create a community hub for social and educational purposes. Sir Wyndham Deedes, who was responsible for its creation, was hopeful that the Settlement could be saved despite financial difficulties.

In July, the Club held a Young Bird Show and a special silver medal was awarded for best unflighted bird to L Seymour. In October the Post runs a story on a Mr George Hilditch who was prosecuted by the Society for the Prevention of Cruelty to Animals for keeping (and selling) wild un-ringed cock linnets. He was fined 5 shillings and ordered to release other birds into Epping Forest. In November the Club held another competition and advertised a trip to the Horticultural Hall and the Annual Show due to take place in December. The Annual Show had 287 exhibits.

1937 - In March the Dagenham Post reported that the Club had an eminant cage birds judge attend the meeting who gave a very interesting talk on pairing and the pit-falls of inter-breeding. The planned ramble to Effingham in May (changed to Warley Common) was advertised and then an outline of the event was also reported in the Post.

The Club's membership was growing and the writer suggests that members could 'hold their own' in Inter-Club Shows. In May the Inter-Club Show was held at Wykeham Hall, Romford. In November the report mentions The Bird Fancy Coronation Cup which would be presented and held for twelve months by the member staging the best bird.

1938 - In December this year the Club held its meeting in the Trades Hall & Social Club. The Dagenham Post also advertised a social event at St George's Hall where awards and prize money would be presented. Over 200 people attended with prominent officials from other clubs also putting in an appearance and helping with the presentations.

1951 - This year Dagenham hosted the Three Towns Show (joint show for Romford, Dagenham & Hornchurch) in Central Park and this proved to be the decider for the Borough to 'go it alone' the following year. The Society took part in the Three Town Show from 1946 until 1951 and then naturally moved to the Dagenham Town Show when it started in 1952. The Programme shows that the Cage Bird marquee was organised by this Club and the Romford & District Cage Bird Society.

1952 - This is the first year where Dagenham 'went it alone' to hold their own Town Show. This first Dagenham Town Show Programme gives the schedule of Classes included in the Show. Club Secretary was H A Cramphorn of Fourth Avenue, Romford.

A map was also found of the layout of the Show Ground for the period 1952-57 showing the position of the marquee as being behind the Dagenham Fire Station.

1953 - Dagenham Town Show Programme giving details of the Classes included in the Show over the weekend. It was orgnaised in conjunction with other Clubs in the area and on this occasion had a Special List of 'Best' in several species for Champion and Novice Classes. Club Secretary was G W Clark of Bede Road, Dagenham.

1954 -Dagenham Town Show Programme outlines that the event was organised by this Society and various Cage Bird Societies from neighbouring districts. It was hoped that by showing a colourful display of budgerigars, canaries, British finches and foreign birds would encourage people to take up the hobby. Club Secretary was H Roffe of Bonham Road, Dagenham.

1955 - Dagenham Town Show Programme showing a schedule of the Classes included in the Show. A special item was the aviary which was one of the largest collections of new and rare coloured budgerigars ever to be shown in public. Club Secretary was E Bissenden of Reede Road, Dagenham.

1956 - Dagenham Town Show Programme included a Selling Class and Open Class for Non-Members for the first time. The aviaries contained a vaiety of birds bred by the members of both this Society and the Essex Canary & British Cage Bird Society. Club Secretary was Mr J F Clifford of Melville Road, Rainham.

1958 - Dagenham Town Show Programme outlining the schedule of Classes and that aviaries would be part of the display. The public were advised that members were on hand to share their knowledge and give advice. Club Secretaries were Mr & Mrs Roffe of Bonham Road, Dagenham.

A map is also included which shows the layout of the Show Ground.

1959 - Dagenham Town Show Programme outlining that the Cage Bird Section has been organised by this Society in partnership with Essex Canary & British Cage Bird Society. As well as the cage birds, aviaries were again on display showing budgerigars and foreign birds. Club Secretaries were Mr & Mrs Roffe of Bonham Road, Dagenham.

1961 - Dagenham Town Show Programme showing the entry Classes that will be judged over the Show weekend. Club Secretary was Mr J Todd of Listowel Road, Dagenham. 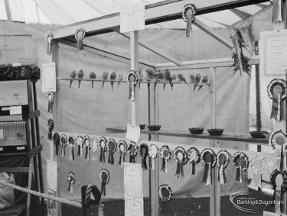 1966 - Dagenham Town Show photograph after the presentation of rosettes tothe Show's winning birds. Not only did Club Members show their birds in competition but they also sold some young birds to members of the public and offered advice on how to keep them healthy. Particularly the budgies and canaries were a very popular purchase from the Show to become houshold pets.

1967 - Extract from theDagenham Town Show Programme - Advertising what the Society does and when it meets, it also offers help to amateur bird keepers who may have problems with their pet bird or aviary. They held a children's pet bird competition on the Sunday of the Show. Club Secretary was Mr L Nunn  of Billet Road, Chadwell Heath.

1968 - Extract from the Dagenham Town Show Programme - Encouraging new member by outlining the wide variety of birds kept by members including, Canaries, British, Foreign and Budgerigars. The Club was holding monthly meeting at Heath Park Hall. The programme included full details of Classes being shown at the Show and was advertising a children's pet bird competition. Club Secretary was Mr S Dansey of Dunster CLose,Collier Row.

1969 - Dagenham Town Show Programme - introducing the Society and outlining its 34 year history stating that the Society even continued to meet during the war and at this time had over 100 members. The Programme now included a full schedule of the Show Classes. Club Secretary was Mr S Dansey of Dunster Close,  Collier Row.

1970 - Extract from the Dagenham Town Show Programme - outlining a brief history of the Society. Unfortunately from this year onwards no schedule of Show Classes was included in the programme. The Society shared the marquee with the local Aquatics Society for the first time. Club Secretary at this time was Mr S Dansey of Dunster Close, Collier Row .

1971 - Extract from the Dagenham Town Show Programme - After a brief history of the Society it goes on to give details of its shows and presentation evening held at Fanshawe Hall, Dagenham and having a membership in excess of 100 members.

1972 - Extract from the Dagenham Town Show Programme - Giving the brief history of the Society and its meetings details. Being the 21st birthday of the Town Show, the Society decided to present special miniture trophies to the best in each section.  It gives information about the National Bird Show held at the Alexandra Palace at which some of the Club members had been successful. President & Show Secretary/Manager - Mr S DeCort of Thorntons Farm Avenue, Romford, Chairman - Mr R Saich of Pasture Road, Dagenham.

1977 - Map of the Dagenham Town Show Layout showing that the Club shared a marquee with the Aquarists and it was positioned near to the boundaries of the Civic Centre and Dagenham Fire Station.

1978 - This is a copy of the Dagenham & District Cage Bird Society Rule Book. 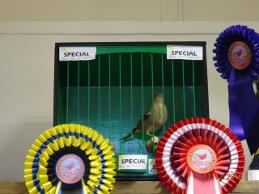 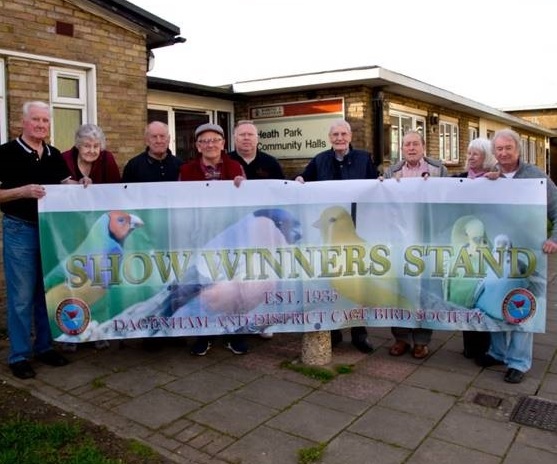 The Barking & Dagenham Post reported on the Club Members' protest at the doubling of hourly hire charges for the meeting hall at Heath Park this week (Wednesday, 15th March edition). The Members contested the management company's comments that they had been informed of the impending rise and that they had not had an opportunity to be consulted or appeal. Richard Wilson (Club Secretary) has raised concerns on behalf of the Club with Barking & Dagenham Council that they and other community users of the hall are being 'priced out' and many may have to close down. The Post is supporting the Club because in their opinion the local Authority is not responding appropriately to community enquiries or needs. 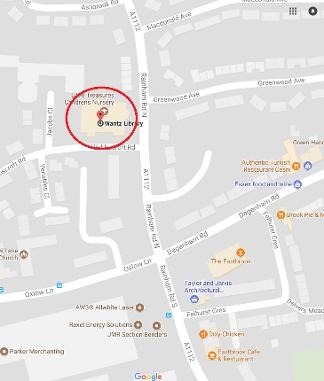 The new hall is run by a very amenable Management Committee who have provided storage and kitchen facilities as well a flexible approach to the Club's needs. Moving forward, let's look forward to a bright, new future for the Club in its new home.

Over 400 entrants were fielded on the day with the Best Bird in Show being won by C Rigden.

Our new banner, signposting our location at Wantz Hall, Dagenham. The start of 2018 and a beacon to highlight the Club's commitment and aspirations for its continued success and longevity at its new venue.

Article on page 2 of the magazine, reporting on the successes of the Open Show in December and the CLub's move to its new venue.